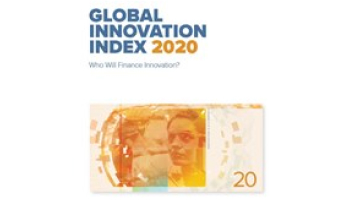 This year Global Innovation Index shows the state of innovation financing through research of evolution of existing financial mechanisms, indicating current development as well as forthcoming challenges. As the world is facing the health and economic crisis caused by pandemic of Corona virus, and as the global public impatiently expects innovative new treatments and vaccines, the need for estimation of innovation financing became more urgent than ever.

The profile of the Republic of Serbia, according to the GII, indicates that the performances of Serbia in innovations are better than could have been expected for the countries with similar gross domestic product (GDP). In the group of 37 countries with higher average income, Serbia takes 10. place, while among 39 European countries, it takes 34. place. Some of the indicators in the framework of “Knowledge and Technology Outputs” where Serbia made significant improvement by 7 places, such as indicators “Knowledge Impact” with improvement by 16 places and “Knowledge Diffusion” by 11 places, were particularly much higher. These indicators reflect the number of published scientific articles referring to the purchasing power, as well as export of information technologies services in comparison to the total export. Also, the significant progress by five places has been made for the indicator of export of culture and creative services where Serbia takes 12. place.

Mr Francis Gurry, Director General of the World Intellectual Property Organization congratulated Serbia on its success with the following words: “I would like to congratulate Serbia for climbing up the Global Innovation Index (GII) by four positions this year and also on its centenary anniversary of the establishment of its Intellectual Property Office which has played an important role in encouraging innovation and creativity in Serbia. Innovation is ever more central to economic growth and competitiveness and the GII shows that Serbia has overperformed on innovation relative to its peers. In that context, Serbia’s rise in innovation performance and its strengths in innovation outputs and in its innovation infrastructure are particularly welcome. We look forward to our continued collaboration.”

Global Innovation Index 2020 can be approached from the site of the World Intellectual Property Organization (WIPO) on the following link https://www.wipo.int/global_innovation_index/en/2020/ where the survey of indications per states can be downloaded, including Serbia.