History of the Intellectual Property Office of the Republic of Serbia

The Administration for the Protection of Industrial Property was an independent state body under the Minister of Trade and Industry. It was composed of permanent and temporary members appointed for 5 years. Both of them were appointed by a decree at the proposal of the Ministry of Trade and Industry. The Administration started working with 13 permanent members – civil servants appointed by a ministerial decree, nominated on December 1920.

The first president of the Administration was Janko Šuman, with the doctorate in law who had studied in Gratz and Vienna, practiced as a lawyer in Celovec and worked for 17 years in the Austro-Hungarian Patent Office in Vienna. Dr. Šuman was the head of the Administration for 17 years and in the Slovenian Bibliographical Lexicon, his work was described pointing out that “with the assistance of his collaborators he managed to organize one well managed and comparatively big state body that quickly began to give good results with regard to order and correct work as well. The Administration enjoyed fine reputation and quickly became well-known in Europe”.

In the report on the work of the International Bureau for Industrial Property from 1923, the predecessor of the modern World Intellectual Property Organization, it was underlined that the procedure introduced by our Administration for the refusal of trademarks registered internationally based on the Madrid Agreement was outstanding. The International Bureau recommended that other offices, following the example of the Administration for Industrial Property of the Kingdom of Serbs, Croats and Slovenes, should introduce so called Refus Provisoir, or the first provisional refusal of trademark. This practice was called the most perfect and the best by the International Bureau and in the long decades of its implementation regarding the Madrid Agreement, the experience confirms that, so Refus Provisoir is implemented even today.

The Administration, from the very beginning, dealt with the tasks of protection of patents, trademarks and industrial designs. It had the Sector for Filing Patents and the Sector for Filing Models, Patterns and Trademarks. It also had the Appeal Board where it was possible to launch appeals against the decisions of the Board (all the decisions were passed by the collegial body – the Board) and the Opposition Board was competent for the procedures of cancellation, seizure and revoking of the granted industrial property rights.

The first patent, registered in the Administration for the Protection of Industrial Property referred to the invention “Device for Brandy Production”, in the name of Milan Jovanović, coppersmith from Novi Sad. The patent was transferred from Hungarian patent no. 48772, and the first patent granted by our Administration was the patent registered under the number 7 for the invention “Self-rocking Cradle” in the name of Adem Subašić, watchmaker from Sarajevo.

The Administration for Industrial Property worked without stopping even in times of German occupation. After the Second World War, when the new social and political circumstances appeared, there were conceptual changes in the performing of intellectual property tasks. By the end of 1948, the Law on Inventions and Technical Improvements was passed, establishing new Federal Administration for Inventiveness under the Federal Planning Commission. The Law envisaged the new form of patent protection – Inventor’s Certificate, implying that the state was the holder of right for the invention, while the protection of inventions by a patent was suppressed out of sight. Patent was mostly intended for the protection of foreign patents.

Since 1981, the Office extended its competence to the field of protection of geographical indications of origin. The first registered GIs were for the Dingač and Postup, wines from Pelješac. There are 75 geographical indications registered in the Office today. They protect the traditional Serbian products such as Užice prosciutto, Cheese from Homolje, Barbecue Meat from Leskovac, Pirot kilim, Bezdan damask, Futog cabbage, Roseberry from Arilje, Lamb Meat from Sjenica, Sirogojno knitted garments,  Zlakusa pottery, mineral waters such as Knjaz Miloš, water Vrnjci, Duboka, etc.

It is interesting to state that the Office in its long history followed the destiny of 8 states (from the Kingdom of the Serbs, Croats and Slovenes to the Republic of Serbia), where it was the central body competent for the industrial property issues, and since 1994 it has become competent for the tasks referring to copyright and related rights.

On the occasion of the 85 years of its work and existence, the Intellectual Property Office of the Republic of Serbia was awarded by the Decree of the President of the State Union of Serbia and Montenegro, Mr. Svetozar Marović, the Medal of Honor for Work presented for the “successful work, results achieved for the affirmation and improvement of intellectual property as well as the significant contribution to the harmonization of the legislation with the world legislation in this field”.

The Intellectual Property Office of the Republic of Serbia, since October 2010, has become the full member of the European Patent Organization – EPO, after six years of the extension state status.

In 2020, the Intellectual Property Office marked 100 years of its existence and work. On behalf of 100 years of the existence of the IPO, the Office has issued a Monograph where the history of the activities of the IPO, since its foundation on November 15, 1920, has been described along with the history of IPR protection that goes further back to the past when the Paris Convention has been signed. The publication is issued in Serbian, but at the end, there is also a summary in English. 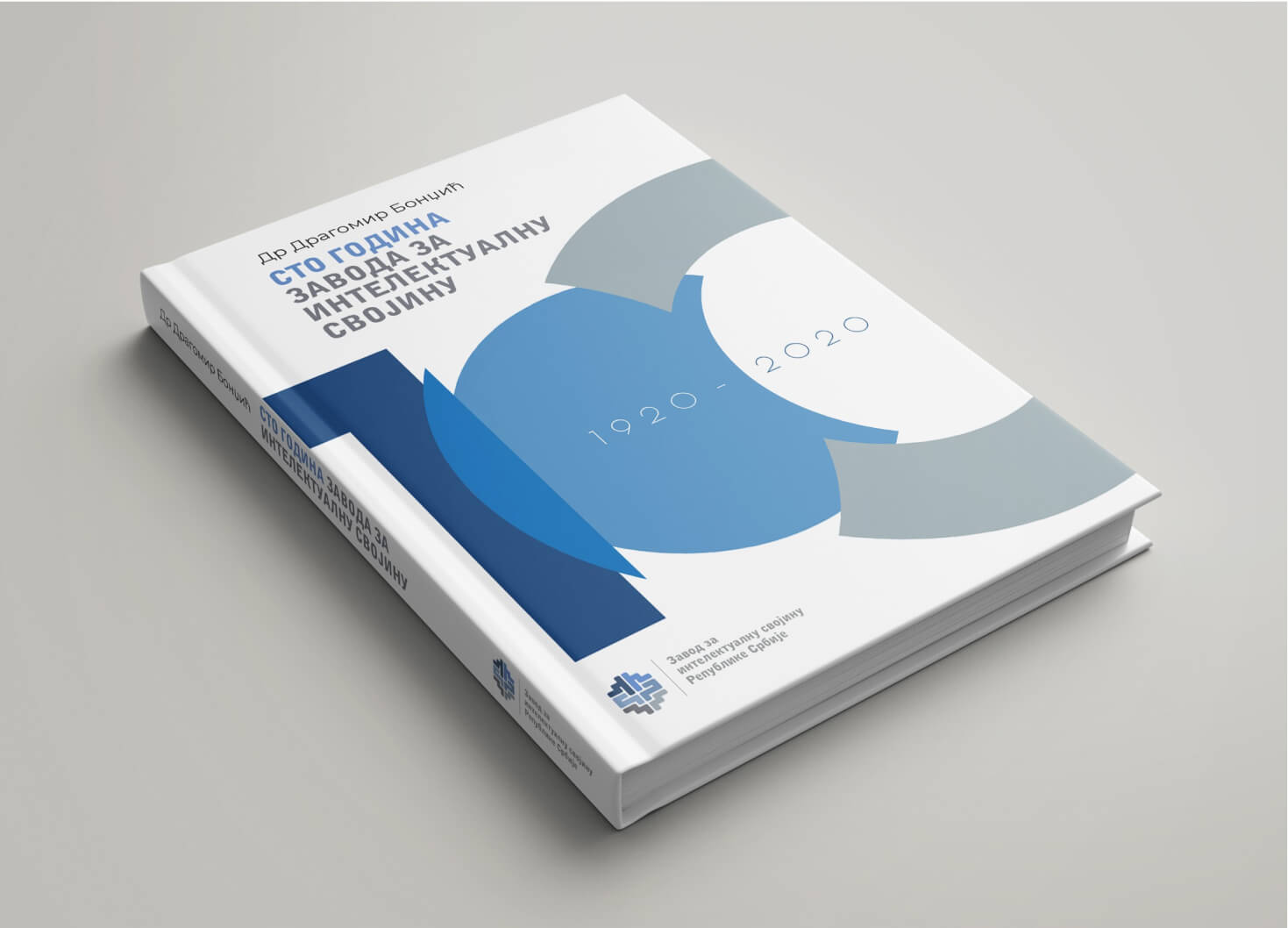 On the occasion of the 100 years of the IPO, the Post of Serbia supported this important jubilee by issuing four stamps with the motives of the first patent – Device for baking brandy, Kilim from Pirot, the first Director of the Office – Janko Suman and the building of the IPO. 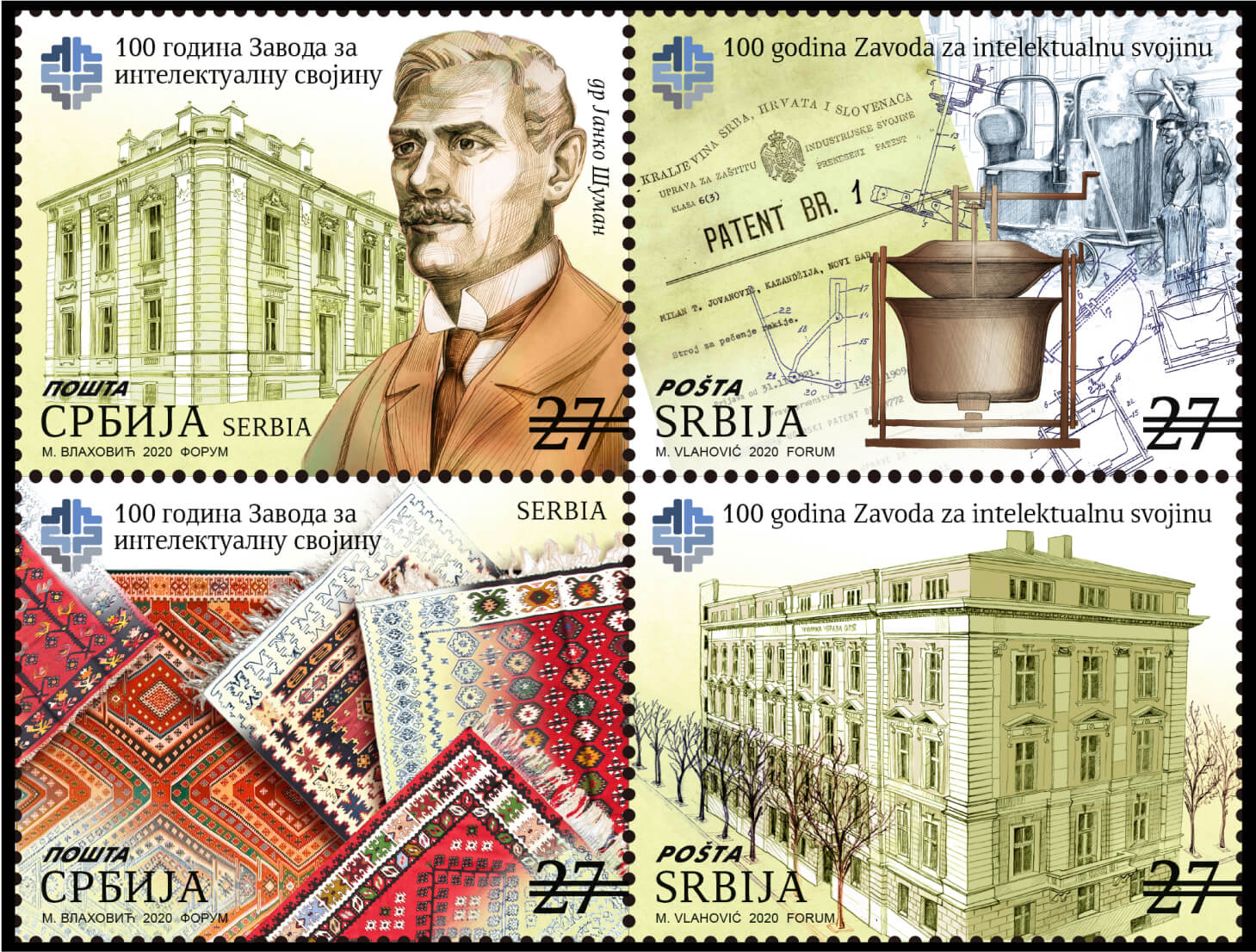 The Intellectual Property Office, nurturing its centennial heritage, is entering a new chapter ready for the challenges of the digital age.

Official Gazette establishing the Administration for the Protection of Industrial Property