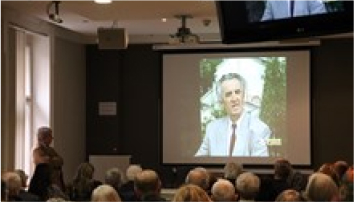 On February 25th, 2020, in the Intellectual Property Office of the Republic of Serbia, a commemoration was held for the recently deceased, long-time Director of the IPO, Mr. Blagota Žarković. The commemoration was attended by the members of the family, friends and colleagues of Mr. Žarković. His personality and lifelong-work was spoken about by Mr. Vladimir Marić, Director of the IPO, Mr. Slobodan Marković, Ph.D, professor at the Faculty of Law of Belgrade University, Mr. Aleksandar Petrović, professor at the Faculty of Philology of Belgrade University, Mr. Andjelko Glavašević, President of the Administrative Board of the Association of Inventors of Vojvodina and Ms. Branka Totić, Asst.Director of the IPO. At the commemoration, a recording from the archives of the RTS, from the emission Treasury was shown, where Mr. Žarković speaks about the work of Nikola Tesla.

All the speakers spoke with great inspiration about the merits of Mr. Blagota Žarković for the improvement of intellectual property in former Yugoslavia, about his contribution to the affirmation of the work of Nikola Tesla, as well as the contribution to the development of inventiveness and the improvement of expert literature in the field of intellectual property. With special piety, they evoked the memories about his visionary spirit, enormous working energy and trust he had for his collaborators.

Mr. Žarković was nominated Deputy Director of the IPO, in November 1975, and nine years later, in October 1984, he was made Director of the former Federal Patent Office. At the head of the Office, he stayed Director, with the break of two years, until he was retired, in June 2003.

He is remembered as a reformer of the system of intellectual property in Yugoslavia.

At his initiative, by the Law on Amendments of the Law on the Protection of Inventions, Technical Improvements and the Distinctive Signs, from 1990, radical changes have been introduced in the patent system of Yugoslavia – strong patent protection has been introduced, the duration of patent rights has been prolonged and the chapter relating to self-management way of regulating these rights has been abolished. In 1995, the new laws have been prepared and then adopted, regulating other fields of intellectual Property: The Trademark Law, The Law on Models and Patterns, The Law on Geographical Indications of Origin and The Patent Law.

Under his management, the Patent Office, in 1992, extended its field of jurisdiction to copyright and related rights. The new law, passed in 1998, contained significant novelties – it included, for the first time, apart from copyright, all of the related rights – right of performers, right of the producers of phonograms, right of the producer of data bases and other rights, which protected investments in the creation of certain intangible property.

During the mandate of Mr. Blagota Žarković, Yugoslavia ratified ten, from the total of 24, international conventions from the field of intellectual property, which have been created under the auspices of the World Intellectual Property Organization.

The editions from the IPO have been mentioned, where Mr. Žarković was the Chief Editor: “European Patent Convention”, four languages edition from 1988, studies “Utility Model” by Mr. Slobodan Marković, Ph.D, and “Legal Protection of Well-Known Marks” by Božin Vlašković, Ph.D, both from 1992, “Protection of Industrial Property in Yugoslavia” in 2001, “Law on Copyright and Related Rights” from 1998, 2001 and 2002 and many others.