Conference on 100 years of the Intellectual Property Office 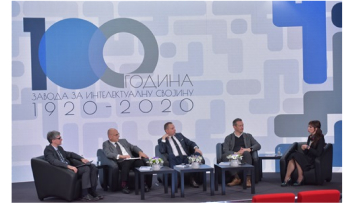 The Intellectual Property Office celebrated 100 years of its existence and work with the online Conference that took place on 17th November 2020. During the Conference there were addresses of the high representatives of the Government of the Republic of Serbia as well as the most important institutions from the field of intellectual property along with the domestic experts from the various fields, who participated in the panel discussion.

After the address of Mr. Vladimir Maric, congratulations were read by the President of Government of the Republic of Serbia, Prime Minister Ms. Ana Brnabic. Prime Minister emphasized that the Government of the Republic of Serbia pays great attention to the development and protection of intellectual property which is one of the key tools for the transformation of Serbian economy based on innovations and creativity. She emphasized that the participation of the creative industries that completelly rely on the intellectual property rights, such as information technologies, film, music or publishing activities, is 5 % in the GDP. Only the export in creative industries has risen in the last two years for 46.7% and annually, the number of business companies in this field increased by 25%. The Government supports the development of the creation of intellectual property also by tax measures such as the Fast deduction of the expenses for R&D and internationally known mechanism “IP Box” the use of which can held some of our companies to be relieved of the income taxes.

Ms. Andjelka Atanaskovic, Minister of Economy of the Republic of Serbia, sent her congratulations by video to the IPO of the Republic of Serbia for this important jubilee, and gave her evaluation that the intellectual property is the important lever of economic and cultural prosperity of the country. Minister Atanaskovic emphasized that there is no prosperous society, which does not respect the intellectual property rights. The importance of existence of efficient system of IPR protection reflects also in the fact that the arrival of the foreign investors is in connection closely to the guarantees that IP Rights must be protected. In that sense, the competences and all the activities performed by the IPO are of great importance for our economy, in particular in the domain of education and awareness raising on the importance of IP and in the activities of assistance to our business companies by providing IP Diagnosis for them.

Mr. Daren Tong, Director General of the World Intellectual Property Organization – WIPO, in his video address, congratulated the jubilee to the IPO and thanked Serbia for having such important scientists as Mihajlo Pupin and Milutin Milankovic that in the previous century gave such exceptional contribution to the world through their innovations and scientific achievements. He has emphasized that it has never been as important as now to support through the protection and commercialization of IPRs, those who work on the development of inventions, i.e. to support scientists and entrepreneurs, in order to make their achievements available on the market. Mr. Tang, made a parallel with Novak Djokovic and has said that the ball is in our field and that the national offices and the society as a whole should do everything possible to assist in the realization of this aim.

Mr. António Campinos, President of the European Patent Organisation, whose member Serbia has been since 2010, congratulated the jubilee to the IPO and emphasized that the IPO gave a significant contribution to by its activities and exchange of practice within the network of the members of the European Patent Office. In particular, he emphasized the contribution in the new project PATLIB 2.0, then the transfer of experiences in the activities of cooperation with the small and medium enterprises, Technology Transfer Centers and in the performance of IP Diagnosis service for businesses.The cooperation of the EPO and the member states reflects also in the fact that the examination procedure is unified in all countries. Also, he underlined also that the future directions of development of new technologies, such as artificial intelligence, additive production, energy storage and other technologies in the rise, pave the way to the new European economy, and patent system is there to secure their investments.

Mr. Christian Archembeau, Executive Director of the European Intellectual Property Office – EUIPO, in video address he congratulated to the IPO this important jubilee. He addressed also the active cooperation of The Intellectual Property Office of the Republic of Serbia with the EUIPO, which has the competence over the protection of trademarks and industrial design for the EU territory. He underlined the importance of implementation of common practice and common tools used at EUIPO in the work of the IP office of Serbia also.

Ms. Catherine Chammartin, Director of the Intellectual Property Institute of the Swiss Federation, in her speech pointed out long years of cooperation between the Institute and the Swiss Government with institutions in Serbia and the Intellectual Property Office in the support of the innovations and protection of geographical indications – GIs. The current project is now under way with the aim to support intellectual property and institutions providing assistance to innovations. She also emphasized that the high position of Swiss Federation on the first place on the Global Innovation Index has roots in the 19th century, when the entrepreneurship and innovations became indispensable in every business effort.

In the second part of the Conference, the panel discussion was held under the title “Intellectual Property: Challenges of the Digital Era – Perspective of Serbia”. Professor Slobodan Markovic, PhD, professor for the subjects of intellectual property rights at Law Faculty of Belgrade University, mentioned that the strict and efficient system of protection by copyright, which absolutely secures economic benefit for the author, is something to be doubted in the modern digital revolution. Today, the Internet has taken over the role of the intermediary in the distribution of copyright works, without the need for the engagement of the intermediary industries. The creation and distribution of the certain categories of copyright protected works became more available to authors with the help of digital technologies. On the other hand, massive piracy that happens this way did not jeopardize the very creativity of the author, but the authors themselves rarely can expect, with few exceptions, to get significant economic benefit from such broader availability of their works. Professor Markovic underlined that the rise of creative industries in the digital era has primarily economic, but also political influence, and Serbia as a country follows that trend and even the copyright became part of the general politics.

Ivan Rakonjac, the Director of the Fund for Innovation Activities, apart from the congratulations for the first century of the existence of the IPO, emphasized that having a good idea is not enough for its realization. The road from idea to realization is very long, and on that road, financing development of good ideas at the very beginning is one of the key factors for the appearance of new ideas on the market. Almost all countries, including Serbia, have certain mechanisms to support the early development of idea, prototype, technologies, and some of those are included in the program of the Innovation Fund. In the structure of companies that participated in the public calls for the financing of start-ups, dominate the field of information technologies. For more mature companies that are interested in the programs of co-financing of innovations alone or in the consortium with the R&D institutions, are mostly innovators in engineering in the field of mechanical engineering, electronics, biotechnology, agriculture and food industries.

Mihajlo Vesovic, representative of the Serbian Chamber of Commerce spoke about the collective trademark “Cuvarkuca” (home guardian) which has been registered this year and represents part of the campaign “Created in Serbia”. The current situation indicated how important the safety of the product and supply chain really are. Serbia did not feel the significant consequences on the market because the food industry is mostly based on the domestic producers and there was no interruption in the supply chain in the course of pandemics. Therefore, this collective trademark promotes domestic products because only those products that have been made by 80% of raw material found in Serbia can use it. We have mentioned that value of product brings along the safety of quality, and the value of the product implies the value of intellectual property. The effect of this action was affirmative and up to now, over 300 products carried the trademark “Cuvarkuca”, primarily in the agricultural industry, but also in metal industry, pharmaceutical industry, and textile industry and industry of civil engineering have joined as well.

Irena Djordjevic, coordinator for the research in NALED spoke about the Global Innovation Index that many countries in the world adopted as a corrective factor for decision makers in states in order to instruct them which road to take for further progress. This topic became very important for Serbia and she emphasized the strengths and weaknesses for Serbia, which improved its position by four places. NALED will make an effort to establish the Coordination Body for Innovations and to improve the eco-system for innovations and work based on experience of users. She also announced the new project of NALED for entrepreneurs with several components for the innovation development but also for the protection of intellectual property. She praised the activities of the IPO to take new approach in order to make the topic of IP protection closer to the public as well as the activities of the Innovation Fund.

On the occasion of the 100 years of the IPO, an exhibition shall be opened in the Museum of Science and Technique in Belgrade “Our Great Inventors” and it is to be opened in the course of November and December 2020. The Monograph “100 years of Intellectual Property Office” has been published by the IPO, and soon will be available in electronic format too. Public company the Post of Serbia supported this important jubilee by issuing four stamps with the motives of the first patent – Device for baking brandy, Kilim from Pirot, the first Director of the Office – Janko Suman and the building of the IPO.

The short film about the Intellectual Property Office can be seen here.