Winners of the competition of the World Intellectual Property Organization (WIPO) 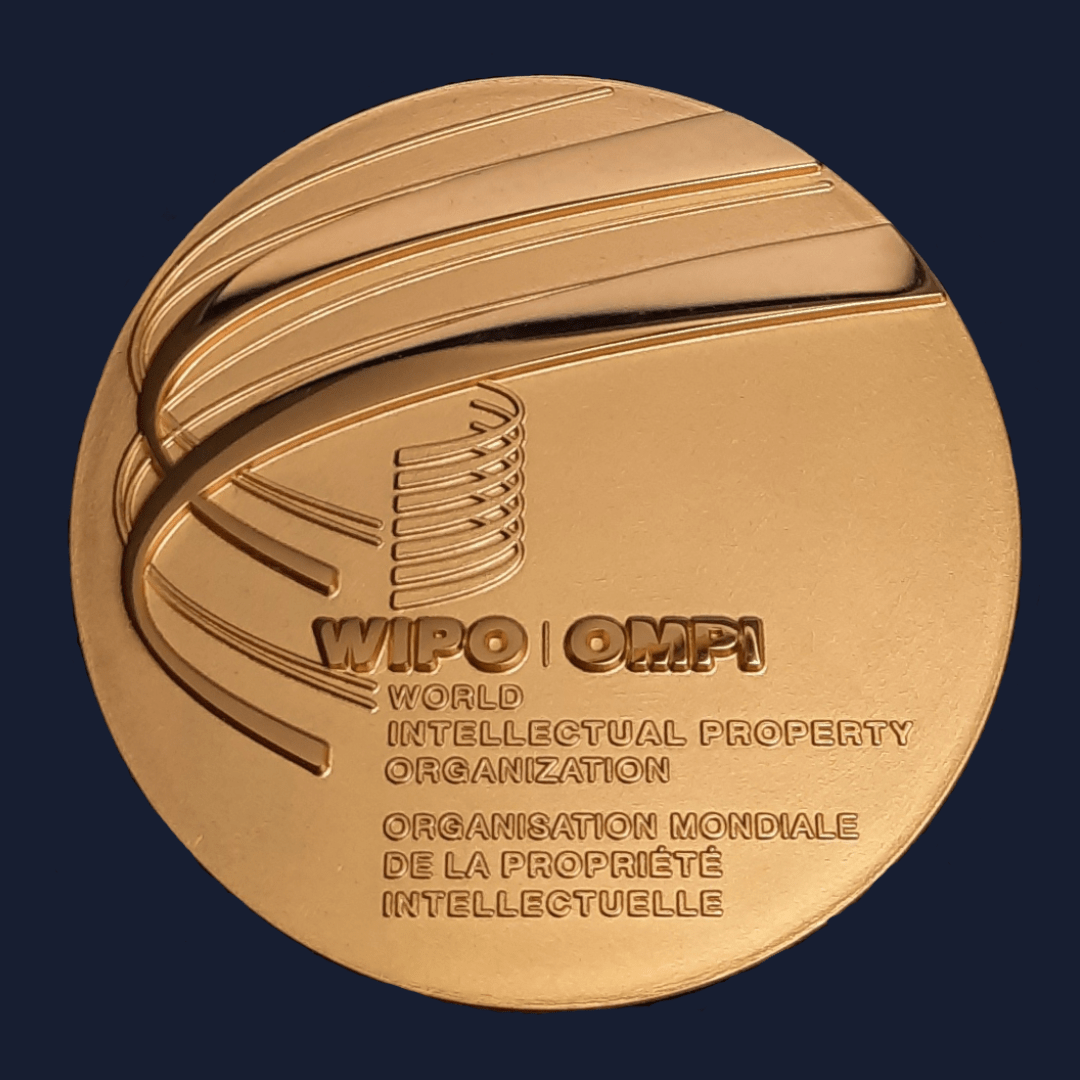 On the occasion of the celebration of the 102nd anniversary of the Intellectual Property Office of the Republic of Serbia, with the aim to promote the importance of the IPR protection for the development of modern economy and society, the competition for the presentation of the WIPO awards has been conducted, in the period of April 4 to October 10, 2022, in the four categories of competition:

Criteria for the presentation of awards in the first category of competition:

Criteria for the presentation of awards in the second category of competition:

Criteria for the presentation of award in the third category of competition:

Criteria for the presentation of award in the fourth category of competition:

The winners for the first category were  decided by the Board in the following composition:

The winners for the second category were  decided by the Board in the following composition:

The winners for the third category were  decided by the Board in the following composition:

The winners for the fourth category were  decided by the Board in the following composition:

Winners of the WIPO Awards:

The award WIPO medal for Inventors in the category for inventor or group of inventors for patent which is valid and which is being implemented  and has proved successful on the market belongs to Dušanka Roglić, graduated mechanical engineer, owner and director of the factory Korali ltd, which employs eighty workers as it commercialized on the market of the region  its two domestic patents for inventions of underground containers for ecological and safe disposal of waste with two domestic patents RS53870B and RS62936B which are valid. Also, for the invention protected by a patent RS62936B Dušanka Roglić filed an international patent application  published under a number WO2017099618A1. However, it concerns patents that secure easier manipulation, better hygienic conditions, minimum contact of users and containers, longer duration of use, economic profitability, long durability, nice external appearance , while they fulfill international standards for devices of this kind and in particular for the improvement of the quality of life and quality of the natural environment. The invention removed all existing shortcomings of the known solutions. The patents of Dušanka Roglić are commercialized  in the framework of the company Korali ltd. which does business in the country and abroad. This company, having at its disposal 7000 m2 of covered space and employs 80 workers was founded by Dušanka Roglić. Also, with the development of new markets where she has been working in the last three years in the United Arab Emirates, Albania, Romania and Greece, Dušanka Roglić plans investment in the increase of the productivity of production as well as the opening of new working spaces  of all production profiles. Dušanka Roglić has thirty years of experience on the tasks of construction and development. She engaged in the independent entrepreneur work since 1993 starting with the engineering through the factory of coaches in Kraljevo, later in her own manufacture that grew into the factory Korali ltd.

Award WIPO IP Enterprise Model, in the category for domestic legal person or domestic entrepreneur for the economic implementation of industrial property was donated to business company :”Bitgear Wireless Design Service ltd.” from Zemun, because in the period from 2018 to 2022 it registered  and economically implemented two domestic industrial designs, one international industrial design and one international trademark while the economic implementation of the alarm device and sensor , protected by industrial designs, directly or indirectly contributed to the increase of export, increase of energy efficiency  and protection of natural environment. However, the company “Bitgear Wireless Design Services ltd.”, since 2018 is the owner of domestic industrial design for the alarm device  registered under the number 11372 (D2018/67). Also, since 2021, the holder of domestic industrial design  for two sensory devices  registered under the number 11629 (D 2021/87), and for the same sensory devices and one internationally registered  industrial design, registered under the number DM/219242 valid on the territories of European Union, Japan, Russian Federation and USA. Apart from the mentioned, the company :”Bitgear Wireless Design Services ltd” has been, from 2022, the holder of the internationally registered trademark for the logo of the company registered under the number 1675011 which is valid on the territories of the European Union, India, Japan, Russian Federation and the USA. Alarm device (marketing name: “manhole monitor/IO Guard”) has wide implementation in the protection of the precious infrastructure settled at various, often distant locations (industrial tunnels, cupboards, switchboards, etc.), as well as the increase of energy efficiency. This device is in the framework of the network ”LoRa” which enables connection and communication of a large number of devices and sensors, implemented in the system of protection  of the underground infrastructure of the Telecom of Serbia and, in the course of 2022, the first amounts of alarm devices have been sold abroad, in particular in Germany and Italy. Sensor devices (marketing name “Plant-O-Meter”) are implemented in agriculture for the maintenance of the health of plants at the high level. These sensors are now sold to universities, research institutes and companies with R&D departments in the field of agronomy, territorially distributed in Serbia and EU. The company “ Bitgear Wireless Design Services, ltd.” founded in 2007, has acquired status of the one of the fastest growing technological companies in Central Europe (Deloitte Fast 50 CE 2013) and it has long lasting experience in the creation and launching of new digital services with the telecommunication operators all over the world.

Award WIPO Medal for Creativity in the category for the author of monograph work/study exhibition  with the catalogue in the field of social and humanistic sciences was presented to Živojin Petrović, founder of educational and non-profit TV station Serbian Scientific Television for the book “Warrior of the Sun”, Belgrade, Laguna, 2022, ISBN-978-86-521-4403-7, which speaks about the professor Branislav Branko Lalović, PhD (1928-1988), protagonist of the fight for solar energy, who was a visionary that sensed the crisis of energy that we are facing today. He, as a nuclear physicist of the Institute in Vinča, started research back in the seventies of the last century about the technological implementation of the solar energy and became one of the pioneers of the exploration of the technological implementation of alternative sources of energy, which took Serbian science in this field into the very world summit of innovativeness. Parallel with the exhibition of the great results of the scientific work of Branko Lalović, the book speaks about the resentments he faced and the strange changes in his life. It can be read also as the chronicle of Serbian science in those days in the shadow of the conflict between the promotion of nuclear or solar energy. In such a way, the book authentically brings to life the memory of the importance of the scientific work of  Branko Lalović, one of the forgotten great men and simultaneously opens many current issues about the energetic problem turning point that the World faces today. It is a pleasure, bearing in mind its public importance, to join in the applause for the award for creativity of the World Intellectual Property Organization (WIPO), in the hope that with the award he will realize his mission with even more force.

Award WIPO Schoolchildren’s Medal, in the category of pupils or group of pupils of the secondary school for invention was awarded to Nikola Teomirović and Miodrag Milanović, pupils of the fourth grade of the School for Electrical Engineering “Nikola Tesla” in Belgrade under the mentorship of the teacher for practical engineering Milan Stanojčić, for the invention under the title: “Ecological antivarose hive”.  This invention refers to energetically independent device, which is fueled through solar panel, for autonomous removal of bee  tick – Varoe, that destroys up to 45% of bee hives, by means of ecological substance – ant acid, without leaving residue in the honey. Authors of the invention contributed to the ecological and energetically efficient solution in the field of bee keeping whose application would reduce the price of bee  products, that would become more accessible to a greater number of people. Apart from the mentioned , the authors of the invention, in the course of the 2021, won the first place at the competition in innovations FELIKS at the Faculty of Natural Sciences and Mathematics in Kragujevac, the first place at the competition for the best technological innovation of the secondary school pupils, the first place at the competition “ProfStar” in Moscow, the award of the City of Belgrade for the creativity of the young in the domain of science. In the May of this year, they won the first place at the international competition  in the business model “POPRI” in the competition of the Adriatic and Ionian Region held in Tirana and they were supported in the first phase of support program by the project “Raising Starts” conducted by the Science Park in Belgrade with the aim of the economic implementation of the invention.

We congratulate the winners and thank all the participants at the competition.

Apart of the mentioned awards, in cooperation with the World Intellectual Property Organization, we also present the award for the domestic legal person with the greatest intensity of use of international system for the registration of trademarks in the course of 2022 – award WIPO Users Medal. This award was presented to the company “ADOC LTD, Belgrade”, which in the course of 2022, in relation to all domestic legal persons had the greatest number of internationally registered trademarks. The basic activity of the company “ADOC LTD, Belgrade”, that was founded in 1990, is production, import and sales of pharmaceutical products. Apart from the wholesale sector, the producer is also the holder of license for commerce for carefully selected high quality medicaments, medical devices and supplements. Also, in the composition of the company, there is the largest domestic platform for on line sales “olive.rs”.